If one follows day by day the actions of the International Monetary Fund, the European Central Bank and the European Commission, it is easy to describe the scenario: the global financial system is organising a coup d’etat in Greece. And, in order to implement it, it is starving and humiliating millions of people, and pushing them towards a humanitarian disaster that we never expected to happen in Europe. 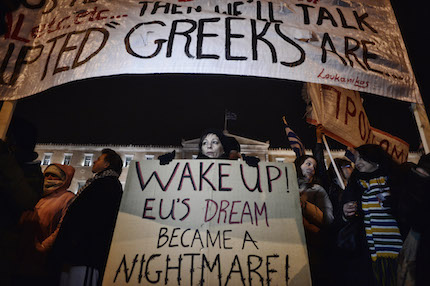 When I was young I read in horror about people living in Polish or German villages who were pretending to ignore that women and men next door were killed with Zyklon B. In Italian, French and German villages today, we pretend not to know that a pogrom of continental proportions is hitting the Greek population.

Meanwhile, in other places, a pogrom is underway against migrant people, thrown into war by French warmongers, and rejected into the abyss. The war that is resounding at the borders of Europe will explode in every city in the near future.

Aggressive nationalists tend to become majority in Italy, France and Austria, not to mention Holland and Hungary. Social conditions are precipitating towards mass poverty and general precarity.

In this scenario I ask a few questions:

1: Can the European Union survive?

No, the Union cannot survive for the simple reason that the Union is non-existent, and has never existed. We are too late in understanding this.

Since Maastricht, the Union has purely been a financial project of predation on social wealth in favour of the bank system, and a project of impoverishment and disempowerment of the workers.

The financial aggression and the humiliation of the Greek government are a proof of the non-existence of the Union. The absence of any movement of solidarity with the Greeks is proof that there is no European people: neoliberal aggression has destroyed any conscious dimension of European society.

Furthermore, the obtuse European politics against migrants, the capitulation of the French government to the nationalist Front, the general refusal to share the responsibility for immigrant people are proof of the non-existence of the Union. The European Union is only a bunch of financial crimes, of political cynicism and of ignorant cowardice.

2: Can the Union be reformed?

No. It cannot reformed as nationalism and racism are the hegemonic force in all the European countries with the exception of Spain and Greece. We—the left, the intellectuals, the university, those who were supposed to make the return of the black plague impossible—are responsible for this.

In the 2005 European Constitution referendum, those who invited French and Dutch people to vote in favour of a fake constitution, the final assertion of neoliberal violence, bears the responsibility for surrendering social hegemony to the right in a way that is now increasingly unstoppable. The black plague is on the rise in every village of this continent that is as united today as it was in the year 1941.

Simple minds have a simple solution: go back to the national currencies, as if reverting to dracma or lira would be better. At last! We may devalue our currency and sell ice cream to some passing penguins. These kind of simple minds do not understand that the drama is not about import-export.

Rather, it is about the alternative between global financial dictatorship and a possible Renaissance based on the end of the Regime of Salaried Work. But ‘common sense’ is unable to see the possibility of such a Renaissance, and so it will not happen.

And nobody knows how to come out from this tunnel.

The financial class wanted to destroy Europe, and now Europe is destroyed.

But at the same time, there is no way out from a non-existent Union. In the end is the secret of the beginning.

European democracy has only been empty talk: financial power has buit the only Union that has truly been existing: a device for the displacement of resources from society to the banks, for the reduction of salary and precarization of work. This is the Union, and it is impossible to come out with political means from a purely financial trap.

The most realistic conclusion of this story is war. And civil war is clearly visible not only at the Southern border where corpses are floating on the sea, and at the Eastern border where Putin is deploying 40 new generation nuclear warheads, but also at the Italo-French border, at the Railway Station of Milano, and in hundreds of European cities where nationalist hatred is getting organised.

Prepare for war: this is the only suggestion. But here the most difficult question pops up: how can we update the old call to turn their imperialist war into our revolutionary civil war?

← Where did the Greek bailout money go?
Stathis Kouvelakis: “Europe has declared war on Greece” →