Stathis Kouvelakis, Syriza central committee member and Professor of political philosophy at King’s College London, argues that the Greek crisis marks the end of the illusion of a democratic Europe. “There have been no negotiations”, he says. “That term isn’t adequate for describing what has happened.” 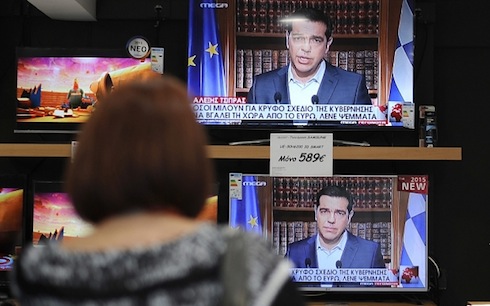 Why has the Greek prime minister Alexis Tsipras finally called a referendum?

Even as Tsipras signed the latest set of Greek proposals, the European institutions remained determined to subject him to a genuine humiliation exercise, demanding that he go still further, beyond what he could handle politically: it had become clear that his own party, his parliamentary majority and even a growing part of society were not ready to accept any more concessions.

How have we reached this point, after five months of negotiations?

There have been no negotiations. That term isn’t adequate for describing what has happened. The European institutions have maintained the same line since the beginning: namely, that of imposing an austerity plan on the new Greek government, forcing it to remain within a framework identical to that of its predecessors and thus showing that electoral contests in Europe can have no effect on what policies are followed, a fortiori when it is an anti-austerity party of the radical Left that wins them. What we call the negotiations were merely a deadly trap – one that has closed in on Tsipras. His error was not to have understood this in time. He thought that if he pushed the discussions as far as possible, the Europeans would ultimately decide on compromise rather than take the risk of a rupture. But they have not conceded anything, while he has given up a lot over the last five months: he has made enormous concessions, public opinion has got used to the idea that an agreement was possible, and the public coffers are empty.

Did Tsipras not also make a mistake in thinking that he could achieve less austerity even while remaining in the Eurozone?

I am part of the tendency within Syriza that has believed from the outset that wanting to reconcile a rejection of austerity with staying in the euro is a contradiction. And with the ECB deciding to cut off the Greek banks’ main means of financing in February, we saw that it was not indeed possible. The currency weapon has served as a means of pressure on the Greek government in order to force it to renounce its anti-austerity policy. The most recent episode in this blackmail was the Eurogroup compelling Tsipras to close the banks for the whole week, by refusing to extend the current programme. The goal is a clearly political one: by taking the Greeks hostage and creating a situation of panic, particularly among the middle classes and the wealthy, they are attempting either to force the government not to go as far as staging the referendum, or else to dictate the conditions in which it takes place and help the “Yes” camp. Europe has declared war on Greece.

Yes, two tendencies are now clashing. The “no” camp is based on a whole part of the population that is already very heavily affected by austerity, and which perceives the Troika’s new demands as an attempt to humiliate Greece. But the “yes: camp, strengthened by the fear provoked by the banks closing, is also putting together its forces. There can be no doubt that this referendum is a very brave political act. That’s something that we have forgotten, as politics has been run down all over Europe: that important political decisions are always risky ones.

What are the possible scenarios for after the referendum?

A victory for “yes” would be a major defeat for Tsipras, and it would doubtless force him to organise fresh elections. Conversely, a victory for “no” would strengthen his determination faced with the European institutions, giving him a mandate different from that of the 25 January general election: it would now be a matter of breaking with austerity whatever the consequences – including if that meant leaving the European framework. When he announced that the referendum was going to be held, it was the first time that the word “euro” didn’t appear at all in his speech. That’s no chance thing.

Is this Europe’s death certificate?

The whole way that the Greek crisis has played out marks the end of a certain idea, or rather, a certain illusion of Europe. Everyone can see its anti-democratic character, which respects only the law of the strongest, as well as its neoliberalism, with its disdain for any form of democratic control. Everyone has been able to see that even though Syriza sought only a partial, moderate, pragmatic rupture with austerity policies, without challenging the fundamentals of the European framework, the clash has been an ultra-violent one. Simply because this government was not ready to capitulate to the neoliberal diktats. Even if the European Union manages to defeat the Greeks’ resistance, it will, I believe, pay a very heavy price for its attitude. Greece is just the most advanced point of the European crisis: the EU’s project has less and less support among public opinion across the continent.