Screening of the documentary film: Golden Dawn, a Personal Affair 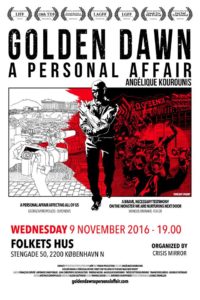 “How can a racist party that was getting less than 0.2% of the vote for years, enter parliament with 18 MPs?

How can a party that promotes violence, hate, sexism and murders amplify its reach after each pogrom?

How can Golden Dawn, when in France it could never exist – in the same way -, remain the third political power in Greece for four years?

What’s in the mind of a Goldendawner?”

Crisis Mirror invites you to the screening of the Documentary “Golden Dawn: A Personal Affair”. The documentary describes a journalist’s years-long delving into a local group of the Greek neo-Nazi party “Golden Dawn”. After the screening a discussion will follow on the news about the trial against members of Golden Dawn for the murder of Paulos Fyssas and the rise of extrem far right in Europe

More information on the documentary: https://goldendawnapersonalaffair.com/