The recent so-called ’rescue’ plan for Cyprus, as organized by the Europgroup, based on the confiscation of a percentage of all bank savings in the Cypriotic banks, shows once again the obvious issue that mass media and bourgeois politicians and analysts do not wish to confront: that the capitalist system is in a deep crisis to the extent that it even fails to abide to its own principles, related to the protection of private property. All the empty talk on ‘free markets’ is a pretext for the advance of international oligopolies, pursuing the narrow interests of local and global oligarchs. Even at this stage, local governments and transnational political institutions are failing to do the obvious if they want to maintain any sense of democracy and social justice: to tax the flow of financial capital that circulates globally and thus to attack and to circumvent financial gambling, which at the moment is the most safe way of profiteering. Instead, governments and transnational authorities (such as the EU or the IMF) are attacking small property owners and small stakeholders of financial capital, shabbily deposited.

Cyprus demonstrates that capitalism is a bankrupt and destructive system that is no longer producing wealth that has meaning to societies, nor does it produce any true kind of development for individuals, societies and the world; what is also important is that adequate surplus value is also not produced in the intensified framework of globalized capitalism, despite the massive exploitation of labor worldwide. What the case of Cyprus, but also the case of crisis-struck Greece show is that capitalists are instead accumulating already existing wealth through dispossession: through the extraction of other people’s property, mostly the property of the middle classes that are nowadays in free fall everywhere in the West and in the South of Europe in particular. State authorities are legitimizing this sort of theft, through their banal scenarios of ‘national salvation’. Simultaneously though, despite all these emergency policies that have occurred over the last three years, the sovereign debt of the ‘punished’ countries is paradoxically still on the rise. Nevertheless at this point still, no official agent in the EU seriously challanges the substance of the countries’ ‘public debt’ as such; who created it, what is it, and who is paying for it?

What should become clear through this low intensity, economic warfare against the middle and lower classes, as well as against local bourgeois -whatever the ‘final’ decision on Cyprus might be, which will surelly not be in favour of its people – is that capitalism is following a process of destruction in order to escape its crisis; through state and international laws working according to neoliberal principles, labor laws, as well as human, social and political rights are being destroyed. In that sense, the social relations and the pretext of the current social reality in Western countries, is seriously challenged from a future that resembles the realities of the 18th and the 19th century Europe, as it was experienced by the majority of those times’ population. Furthermore, capitalism –through state policies- is destroying fixed (machines, infrastructure, natural resources) and variable (labor force, skilled and unskilled) capital. Why is that? Because this destruction will give way to the rise of the new; a new configuration of social relations and social needs that can put capitalism back to the track of accumulation and valorization process –with the latter being the two main conditions of the reproduction of the capitalist process.

The attack on small property creates the conditions that Marx described as ‘primitive accumulation’. Primitive accumulation is the analytical concept that Marx coined in order to explain the process that constructs scarcity. Laws that favour the capitalist class produce scarcity for the masses, in order to transform a country’s general population into proletarians that own nothing besides their labour power. The condition of scarcity works in favor of the capitalist because the dispossed worker is forced to accept any sort of  work or wage condition offered to him/her. Scarcity imposes the law of need and does not allow choices and alternatives to individuals and social groups of people. Scarcity thus allows to the capitalist the flexibility to function in his/her terms, undermining the capacity of individuals to antogonise with capital, thus forced to succumb to the rules imposed on them in order to barely survive as long as they are useful as ‘workforce’. The decline of the middle class signifies the begining of its proletarianization.

So forget about all the empty talk of ‘free market’, private property rights, and liberal democracy; look at the contradictions behind the assault waged on peoples and lifeworlds; forget about the propaganda of lazy Greeks and lazy southern Europeans who did not pay their taxes and the rest of bourgeois nonsense and fat talk; get class conscious and think internationalist in order to prevent the worst.

David Harvey in his book, ‘the enigma of capital, capitalist crises’ (2010), argues that the capitalist process of accumulation today occurs through dispossession because capitalism fails to produce adequate surplus value through the production and circulation of wealth today. Profits are thus produced not by newly produced wealth, but by the extraction of already existing wealth, usually the one belonging to the poorer sections of societies. The success of the attack on the poor will also determine capital’s exodus from its crisis, as the poor will be forced to return to work conditions with no rights, in order to maximize the wealth that the capitalist class will get. The attack on all redistributive mechanisms of welfare states today, demonstrates the way capital works in organising the social relations necessary for the reproduction of its process. 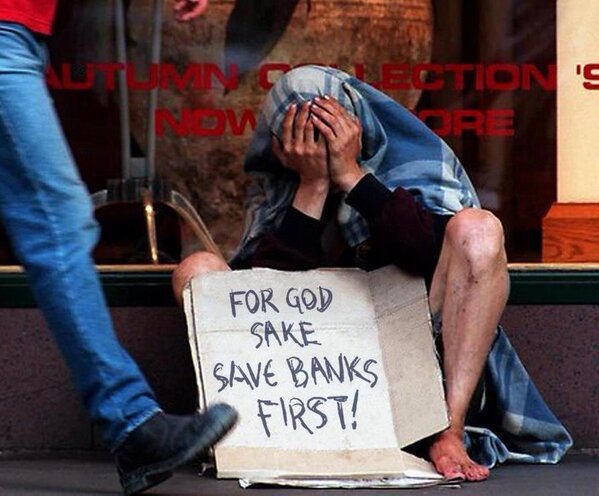 ← Screening: The Revolution Will Not Be Televised (2003)
The looting of Cyprus – The left wing goes silent →