With their calls for broad political unity behind all Greece’s major parties, or for a state ban on Golden Dawn, left organizations such as Syriza, Antarsya, and the KKE are doing all they can to prevent such a struggle from emerging. 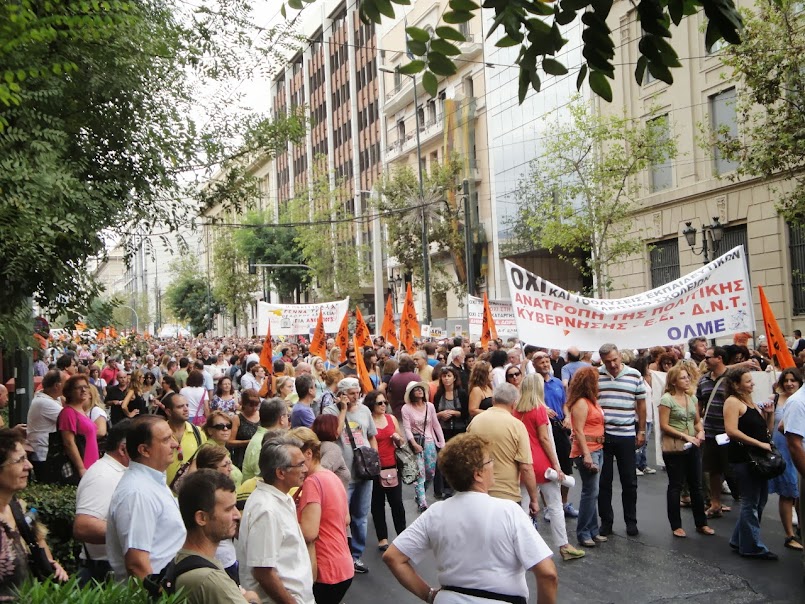 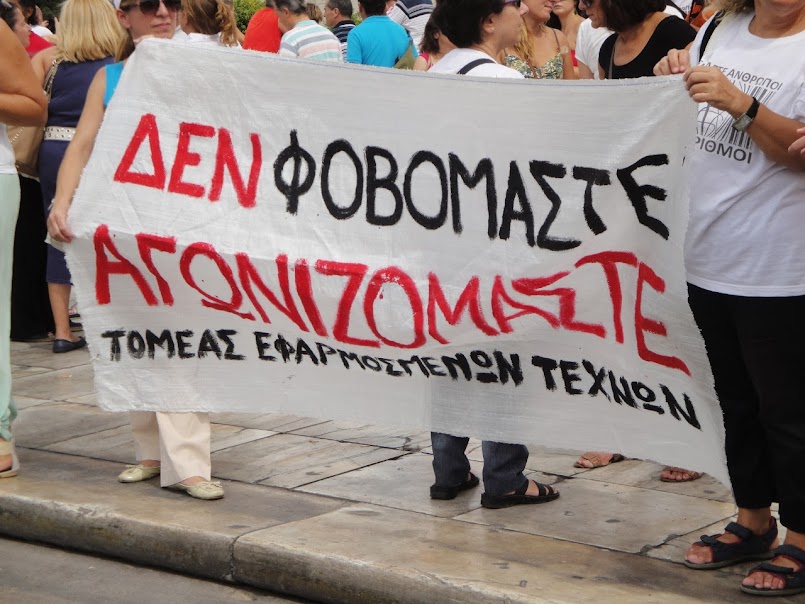 On Thursday 19 Sep, thousands of people once again took to the streets in Greece to protest the social attacks carried out by the government and growing fascist violence. Greece’s political parties have responded to the mass protests with demands for a ban on the fascist party, Golden Dawn, and a strengthening of the apparatus of state repression. Thousands gathered for the funeral of the 34-year-old leftist hip-hop musician Pavlos Fyssas, who had been assaulted and stabbed to death by a group of neo-Nazis one day earlier. Smaller memorial and protest meetings were also held across the country. Students interrupted their lessons to commemorate Fyssas.

Students also occupied ten other schools in the Attica region around Athens, bringing to 20 the number of schools that are now occupied. They are acting in support of striking teachers, who are protesting mass sackings in the public sector.

The teachers strike started on Monday 16 Sep. On Friday they decided to continue the strike the coming week. Doctors, nurses, lawyers and other public sector workers joined the teachers strike for 48 hours. On Wednesday striking public service workers combined their demonstrations against planned mass layoffs with protests against Golden Dawn. On the same evening tens of thousands of people took to the streets in over two dozen cities protesting against the fascists. There were repeated clashes between protesters and police.

Masses of workers are connecting politically the social attacks on the working class by the Greek government and the European Union (EU) to the rising fascist terror the Greek ruling elite has deployed against the population. The Greek daily To Vima listed at least 300 violent attacks by neo-Nazis over the last three years.

The fascist thugs have been deliberately built up in recent years to intimidate workers and suppress opposition. Golden Dawn has close links to the police. Not only did a majority of the police vote for Golden Dawn in the last election, they have been active in protecting members of the party from prosecution and have helped persecute and torture its opponents.

The rise of Golden Dawn is the most naked expression of the bankruptcy of Greek capitalism and growing popular disaffection with Greece’s traditional parties of government. An organization that denies the Holocaust and has a modified Swastika as its party symbol, Golden Dawn won 7% of the vote in the last election and currently has 18 deputies in the 300-strong Greek parliament. Opinion polls currently award the party around 13 % support making it the third largest force in Greek politics.

The various political parties have responded to the mass protests by closing ranks and discussing a ban on Golden Dawn. Amid mounting popular opposition to social cuts, they are utilizing the murder of Fyssas as an excuse to attack democratic rights and expand the repressive powers of the state.

The build-up of this state apparatus, which in fact has close ties with Golden Dawn, is not a step forward but backward in the struggle against the rise of fascism. Authoritarian structures and a strong state apparatus are the most important breeding grounds of fascism.

With their calls for broad political unity behind all Greece’s major parties, or for a state ban on Golden Dawn, the bourgeois “left” and pseudo-left organizations such as Syriza, Antarsya, and the KKE are doing all they can to prevent such a struggle from emerging.

The chairman of the ruling social-democratic PASOK party, Evangelos Venizelos, spoke out openly in favor of banning Golden dawn, although this is not permitted by the Greek Constitution. He said: “Golden Dawn uses violence as its main tool and must be treated as a criminal organization. It has now gone beyond all limits. The state must intervene.”

The head of the former ruling party Democratic Left (DIMAR), Fotis Kouvelis, called on all parties to work together against the fascists: “All democratic parties must agree to form a front to defend peace and Democracy from against the neo-Nazi murderers.”

The largest government party, New Democracy (ND) also spoke in favor of unity between the major parties. It is not the time for “internal disputes and tensions,” declared Prime Minister Antonis Samaras. He called for increased use of the police. “Democracy is much stronger than its enemies realize,” he stated in a televised address.

According to Kathimerini, ND and PASOK have agreed “to use all legal powers available under criminal law” to tackle Golden Dawn. But Interior Minister Nikos Dendias has already announced that laws could be changed in order to proceed even more harshly against opponents.

The largest opposition party, the Coalition of the Radical Left (SYRIZA), appealed to what it called the “democrats” of the ND to support a struggle against the fascists. SYRIZA spokesman Dimos Papadatos told the WSWS on Thursday that his party sought to “put pressure on ND to end their cooperation with the fascists.”

SYRIZA is one of the most aggressive supporters of bolstering the state’s repressive powers, calling for Golden Dawn to be declared a criminal organization.

“If Article 187 of the Criminal Code was applied, all the members of Golden Dawn could be arrested and imprisoned,” Papadatos said, “That is what we have to do.”

Technically, however, SYRIZA rejects an official ban on the party. “The banning of an organization would mean a threat to democracy,” Papadatos declared cynically.

Other left groups such as the Socialist Workers Party (SEK), which is part of the Antarsya coalition, have long called for a ban of fascist organizations.

The arch-Stalinist Communist Party (KKE) calls for a “popular front” against the fascists.

The united front of all the parliamentary parties, while presented as a threat to Golden Dawn, is ultimately directed at crushing opposition in the working class. The strengthening of the state apparatus serves to suppress labor disputes and protests, and will ultimately be directed at political parties seeking to mobilize opposition in the working class to capitalism and austerity.

On three separate occasions this year, striking workers have already been placed under martial law and forced back to work by the police. In July, 4,000 police officers enforced a ban on demonstrations imposed for the visit of the German Finance Minister Wolfgang Schäuble.