THE LARGEST PRISON strike in U.S. history has been

going on for nearly a week, but there’s a good chance you haven’t heard about it. For months, inmates at dozens of prisons across the country have been organizing through a network of smuggled cellphones, social media pages, and the support of allies on the outside. The effort culminated in a mass refusal to report to prison jobs on September 9, the anniversary of the 1971 Attica prison uprising.

“This is a call to action against slavery in America,” organizers wrote in anannouncement that for weeks circulated inside and outside prisons nationwide, and that sums up the strikers’ primary demand: an end to free prison labor. “Forty-five years after Attica, the waves of change are returning to America’s prisons. This September we hope to coordinate and generalize these protests, to build them into a single tidal shift that the American prison system cannot ignore or withstand.”

Since Friday, details on the strike’s success have trickled out of prisons with some difficulty, but organizers and supporters have no doubt the scale of the action is unprecedented, though their assessment is difficult to verify and some corrections departments denied reports of strike-related activities in their states.

Prisoners in 24 states and 40 to 50 prisons pledged to join the strike, and as of Tuesday, prisoners in at least 11 states and 20 prisons continued the protest, according to outside supporters in Alabama. Tactics and specific demands varied locally, with some prisoners reportedly staging hunger strikes, and detainees in Florida protesting and destroying prison property ahead of the planned strike date.

“There are probably 20,000 prisoners on strike right now, at least, which is the biggest prison strike in history, but the information is really sketchy and spotty,” said Ben Turk, who works on “in-reach” to prisons for the Incarcerated Workers Organizing Committee, a chapter of the Industrial Workers of the World union helping to coordinate the inmate-led initiative from the outside.

Small rallies and demonstrations in support of the strikers were staged in dozens of U.S. cities and a couple of foreign countries, but so far the coordinated strike remains largely ignored on the outside.

“The strike has been pulled off, but we’re not quite breaking through to getting mainstream media,” Turk told The Intercept, noting that the strike was widely covered by independent media. “I talk to people who aren’t in that milieu and aren’t seeing it on their social media, and they’ll be like, ‘We didn’t hear about it, there’s nothing about it anywhere.’”

That’s bad news for the strikers, who rely on the support of outsiders to push for more radical reform but also depend on their outside visibility to mitigate retaliation by prison officials.

A week into the strike, a couple of groups were providing updates on the action, which organizers say will carry on indefinitely, as well as outsidedemonstrations of solidarity.

The information blackout is largely due to prison officials’ ample discretion in the details they choose to disclose. As the strikes began, reports emerged of several facilities being put on lockdown, some preemptively, but the only way for outsiders to get updates would be to call each facility and ask, usually getting no explanation about the reasons for a lockdown. Reports also emerged claiming that prison leaders in Virginia, Ohio, California, and South Carolina were put in solitary confinement as a result of the strike, according to the Alabama supporters.

The Alabama Department of Corrections did not respond to a request for comment, while corrections departments in Virginia, Ohio, and California — three of the states where strike-related disturbances were tracked by outsiders — denied that inmates in those states participated in the strike.

A spokesperson for the Florida Department of Corrections said that prisons there had resumed normal operations after several hundred inmates staged protests and work stoppages at four facilities. The spokesperson added that several inmates identified in the disturbances were transferred to other regional institutions and will be disciplined “in accordance with procedure.” At the Kinross Correctional Facility in Michigan, some 150 prisoners identified as “ringleaders” of the protests were also removed to other facilities after prisoners assigned to kitchen work declined to report to their jobs on September 9 and some 400 prisoners staged a peaceful protest. The situation there grew more tense a day later when prison guards went through the facility to remove suspected leaders, the Wall Street Journal reported, and the prison remains on lockdown.

Retaliation against strikers is also hard to track, but outside advocates said that several leaders were put in isolation and denied communication privileges, making it even harder for information to come out.

In one instance, at the Ohio State Penitentiary, Siddique Hasan, a well-known prison activist sentenced to death for his role in a 1993 prison uprising, was accused of plotting to “blow up buildings” on September 9. Hasan, an organizer with the Free Ohio Movement, was confined to isolation and denied access to the phone for nearly a month before the strike — a deliberate effort to prevent him from communicating with the outside about it, supporters said.

“What people have to realize is that these men and women inside prison — they expected to be retaliated against, but they sacrificed,” said Pastor Kenneth Glasgow, a former prisoner and a supporter of the Free Alabama Movement, the prisoner-led group that first called for the nationwide strike.

“People on the outside are not understanding they are being bamboozled,” he added, expressing disappointment that the strike hadn’t garnered more attention. “A lot of people are not realizing the value in what’s going on, they don’t realize that it’s slavery, that slavery still exists.”

While the most ambitious to date, the September 9 strike was hardly the first such effort by prisoners. Prison protests have been on the rise in recent years, following a 2010 strike during which thousands of prisoners in Georgia refused to work, an action that was followed by others in Illinois, Virginia, North Carolina, and Washington. In 2013, California prisoners coordinated a hunger strike against the use of solitary confinement that at its peak involved 30,000 prisoners. And this year, prisoners rioted at Holman prison in Alabama — one of the facilities most actively involved in the current strike — and went on strike in Texas. 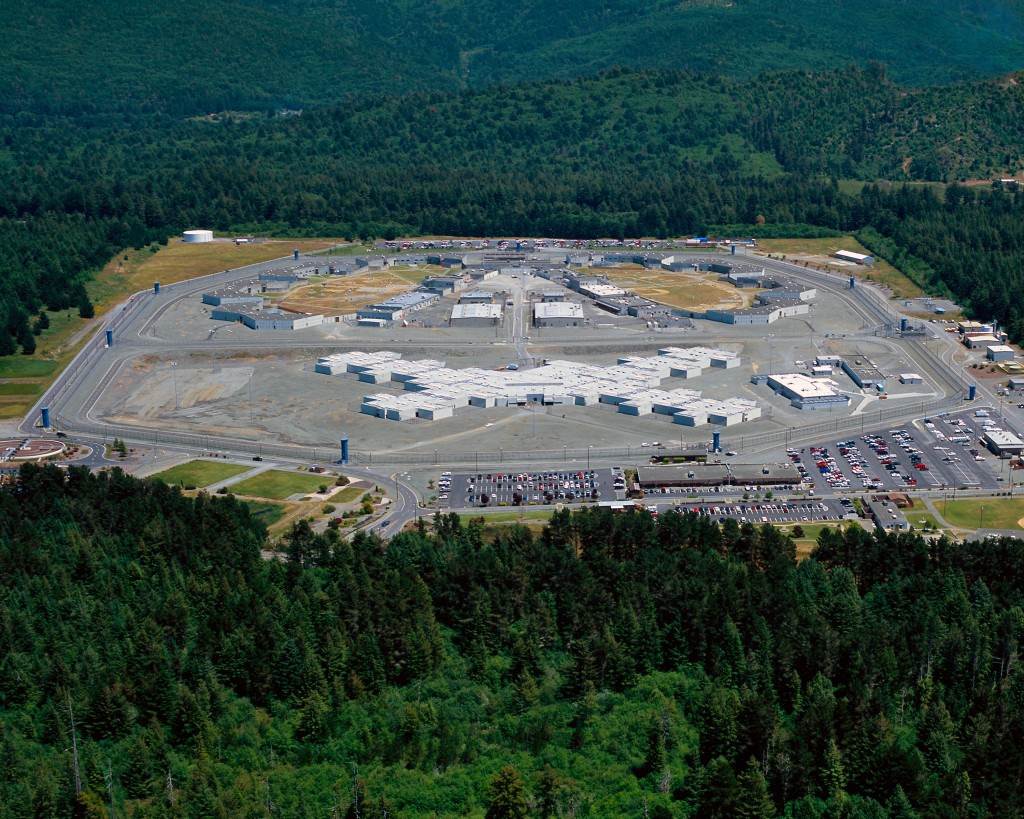 Pelican Bay State Prison, where inmates in long-term solitary confinement organized a hunger strike in 2013 that grew to include 30,000 prisoners at its peak.

Across the country, inmates are protesting a wide range of issues: from harsh parole systems and three-strike laws to the lack of educational services, medical neglect, and overcrowding. But the issue that has unified protesters is that of prison labor — a $2 billion a year industry that employs nearly 900,000 prisoners while paying them a few cents an hour in some states, and nothing at all in others. In addition to work for private companies, prisoners also cook, clean, and work on maintenance and construction in the prisons themselves — forcing officials to pay staff to carry out those tasks in response to work stoppages. “They cannot run these facilities without us,” organizers wrote ahead of the strike. “We will not only demand the end to prison slavery, we will end it ourselves by ceasing to be slaves.”

Prisoners on strike are calling for the repeal of an exception listed in the 13th Amendment to the United States Constitution, which bans “involuntary servitude” in addition to slavery, “except as a punishment for crime whereof the party shall have been duly convicted.”

That forced labor remains legal in prison is unknown to many Americans, and that’s something strikers hope to change with this action. But it’s also a sign of how little the general public knows about the country’s massive prison system. “A nation that imprisons 1 percent of its population has an obligation to know what’s happening to those 2.4 million people,” Ethan Zuckerman, director of the Center for Civic Media at MIT, wrote in a blog post about the tepid response to the strike. “And right now, we don’t know.”

But while information on prisons is notoriously hard to obtain, a potentially larger problem for the striking prisoners is the seemingly limited interest in their plight, which remains confined to a few activists, family members, and formerly incarcerated people, even at a time when criminal justice issues and prison reform are high on the agenda of social justice advocates and politicians alike.

Prisoners themselves have been largely excluded from the last few years’ debate on mass incarceration, but the very fact that they were able to coordinate a collective protest of this scale, with all its limitations, is testimony to their determination that the prison system needs radical change, strike organizers say.

“When you have people who are inside, locked up, who have overcome all these obstacles and barriers and have organized in 24 states, 40 to 50 prisons,” said Glasgow, “that means all of us out here need to start stepping up.”

← Screening and discussion with filmmaker Manuela Zechner: ‘Remembering Europe: a journey into the future of crisis.’
Defend the ZAD– a call for international solidarity ! October 8th & 9th 2016 →