Europe's revolution from above (Étienne Balibar)

Europe’s revolution from above 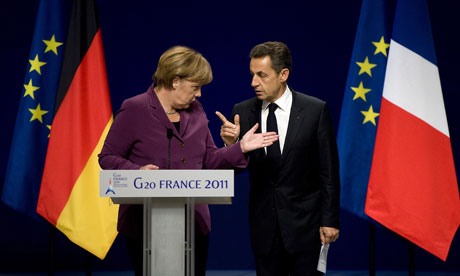 After the fall of the Greek and Italian governments and the disaster of the Spanish left in this Sunday’s elections, what is happening in Europe? Are we looking at incidents in a minor story of political reshuffles that have failed to keep up with the financial crisis? Or are we crossing a threshold in the very development of this crisis, which will have an irreversible impact on institutions and the manner in which they are legitimated? Despite the unknowns, it’s time to risk an assessment.

There is not a great deal to be said about electoral events (such as the one that will probably occur in France in six months’ time). It is clear that voters hold governments responsible for the growing social insecurity experienced by a majority of citizens in our countries, and that they have few illusions about their successors (although there is no denying that in the wake of Silvio Berlusconi, one can understand why Mario Monti is, at least for the moment, setting new popularity records).

The more important question concerns the evolution of institutions. Resignations in response to pressure from markets, which make borrowing costs rise or fall, the emergence of a Franco-German “directorate” within the EU, and the enthronement of technicians linked to international finance, ordained and supervised by the IMF, cannot fail to provoke debates, emotions, expressions of concern and justifications.

One of the most frequently recurring themes has been the “commissarial dictatorship”, which suspends democracy in order to preserve the possibility of its continued existence – a notion defined by Jean Bodin at the dawn of the modern state and later theorised by Carl Schmitt. “Commissars” today cannot be army officers or magistrates, they must be economists. This is exactly what a Le Figaro columnist wrote on 15 November:

“The scope and the duration of these mandates [Monti and Lucas Papademos] should be sufficiently large so that they may be effective. But both must be limited in order to guarantee, in the best conditions, a return to democratic legitimacy. We cannot have a situation where it can be said that Europe is being built on the backs of its peoples.”

To this reference, I would prefer another: that of a “revolution from above”, which the leaders of dominant nations and the Brussels and Frankfurt technostructure are attempting under the whip of necessity – ie the predicted collapse of the single currency. We know that this notion, invented by Bismarck, designates a change to the structure of the material constitution, in which the balance of power between society and state, economics and politics, results in a preventive strategy on the part of the ruling classes.

Is this not what is happening with the neutralisation of parliamentary democracy, the European Union’s institutionalisation of budgetary and fiscal controls and the sacralisation of banking interests in the name of neoliberal orthodoxy? Doubtless these changes have been germinating for quite some time, but they have never been demanded as part of a new configuration of political power. Wolfgang Schäuble was therefore not wrong to present the future election of the president of the European Council through universal suffrage as a “true revolution” that will confer on the new edifice a halo of democracy – only the revolution is already underway, or at least it has been sketched out.

However, let’s not hide the fact that the success of this initiative is far from assured. On the road ahead stand three obstacles, whose combined effects could result in an exacerbation of the crisis, and therefore the end of Europe as a collective project. The first is that no institutional configuration can, by definition, reassure the markets – code words for a halt to speculation, since speculation itself feeds on risks of bankruptcy and the possibility of short-term gains. This is the principle behind the proliferation of derivatives and yield spreads on sovereign bonds. The investor institutions that feed the shadow banking system need to push national budgets to the brink, while banks need to count on states (and taxpayers) in the event of a liquidity crisis. But all of these players constitute a single financial circuit. As long as the debt economy, which now regulates our societies from top to bottom, is unchallenged, there will be no viable solution. However, contemporary governance excludes this possibility, even if it results in the sacrifice of any prospect of growth for an indefinite period.

The second obstacle is the intensification of intra-European contradictions. Not only do we now have a two-speed Europe, but this could shortly be transformed into a three- or four-speed Europe threatened with collapse at any moment. Of the countries that are not in the eurozone, a number – eastern European sub-contractors for German industry – will seek greater integration, while others (above all the United Kingdom) might be forced to break off or suspend their involvement in Europe, in spite of their dependence on the single market.

As for the sanctions mechanism that is supposed to punish underperforming students of budgetary austerity, it is an illusion to think that these will only affect peripheral countries. And you only have to look at the impact of such a policy in Greece, which is drained of its lifeblood and on the verge of revolt, to imagine what effect a general adoption of such recipes would have for all of Europe.

Last but not least, the Franco-German directorate, already rocked by disagreement over the role of the European Central Bank, has very little chance of emerging stronger from such trials, in spite of the electoral interests of its members, and in particular those of the French president.

But the most difficult obstacle to surmount will be that of public opinion. Without doubt, blackmail in the form of warnings of chaos and the constant threat of ratings downgrades can temporarily paralyse democratic reflexes. But they cannot indefinitely postpone the need to obtain popular approval for the changes, however limited, that will need to be included in revised EU treaties. And any consultation on this question is likely to backfire, as was the case in 2004. So the crisis of strategy is then accompanied by a crisis of representation, also itself well advanced.

We should not be surprised then, given such conditions, that critical voices are now being heard. However, these have tended to contradict each other. On the one hand, we have those (like Jürgen Habermas) who argue for a reinforcement of European integration, while affirming that this will only be viable in the event of a triple “redemocratisation”: a rehabilitation of politics to the detriment of finance, which places control of central decisions in the hands of a reinforced parliament, and re-establishes the goal of solidarity and the reduction of inequalities between European countries.

On the other hand, we have those (in particular French deglobalisation theorists) who see the emergence of new governance as the culmination of a process to force “sovereign” peoples to submit to a supranational structure, which can only serve the interests of neoliberalism and its strategy of accumulation by dispossession. The former are clearly insufficient while the latter are dangerously close to merging with potentially xenophobic nationalisms.

The big question is what will be the direction of the citizens’ revolt against the dictatorship of markets that instrumentalise governments, which has recently been announced by Jean-Pierre Jouyet. Will it turn against the instrumentalisation of debt that crosses borders, or will it turn on the European project as a cure that is worse than the disease?

Will it attempt to establish counter powers, which are not only constitutional but independent and if need be insurrectional, wherever the management of the crisis has resulted in a concentration of legal or de facto power? Will it be content to demand the reconstitution of the traditional national and social state, today devoured by the debt economy, or will it seek socialist or internationalist alternatives to establish the foundations for a use- and activity-based global economy of which Europe will only be a province?

We can bet that it will be the spread and distribution across Europe of inequalities and the effects of recession (and in particular unemployment) that will be decisive factors in answering these questions. But it is the intellectuals and activists and their capacity for analysis and indignation, which will provide (or not) the symbolic means for revolt.