The Guardian: Golden Dawn and the rise of fascism

Fascists didn’t suddenly multiply in Greece – their ideas gradually permeated public consciousness. They will elsewhere, too. 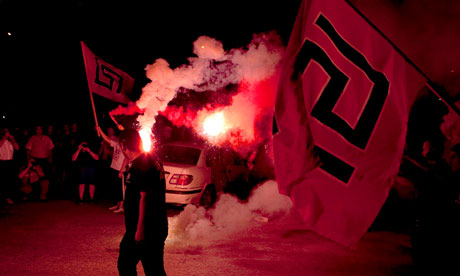 The electoral take-off of Golden Dawn took Greece by surprise. In the space of a few months it passed from insignificance to almost 7% of the national vote, a percentage it maintained at the June elections, when the voters had been properly apprised of its neo-Nazi character. This party now has a rather even geographical spread and sex distribution, slightly higher among men and in rightwing areas, and also a definite social basis – mainly small proprietors, unemployed, members of the security forces, plus the criminal underworld.

Where did Golden Dawn come from? Is it a national phenomenon or does it portend a European trend? Could similar parties rise in other societies ravaged by the economic crisis? Certainly, it cannot be blamed on any “national” characteristics; If anything, Greece was, together with Britain, one of the very few countries that did not develop any mass fascist movement before the second world war.

Fascists did not suddenly multiply in Greece. Rather, extreme right ideas and values gradually permeated public consciousness, and became mainstream in the last 20 years. Then the troika (of the European commission, European Central Bank and the IMF) imposed measures of violent pauperisation, and even created widespread perceptions of decay and victimisation, and feelings of national persecution and humiliation. All these, as the US historian Robert Paxton argues in his magisterial Anatomy of Fascism, help fascism rise. Finally, when the crisis stole the clientelist appeal of the ruling parties, many of their voters turned towards those who professed openly what traditional politicians only implied.

Golden Dawn appeared on the electoral radar in November 2011, when all the other forces of the right participated in the unelected, and unloved, government of a banker, Lucas Papademos. It projected an anti-systemic image, but actually its objectives and practices were in harmony with those of powerful Greek institutions. For example, immigrants were first demonised by the state itself. They were interned, and their rights were cancelled in practice. Bureaucrats failed to enforce protective labour legislation. The police and the judiciary do not prosecute fascists under existing laws, which are more or less adequate, and don’t penalise racial attacks, antisemitism and spreading of hate, all trademarks of Golden Dawn.

The rise of fascism also owes a lot to mainstream media. Effectively unregulated by the state and owned by a few small Berlusconis, Greek television channels have for decades been cultivating chauvinism, racism, sexism and anti-immigrant hate. Now they habitually present Golden Dawn cadres as normal people, explore their lighter side and even turn them into lifestyle icons or tele-celebrities. They rarely discuss the violent crimes for which many of these people have been accused or convicted.

Most worrying is the ease with which conservatives justify fascist actions. The recent violent attack by Ilias Kasidiaris, a Golden Dawn deputy, on two leftwing women deputies, broadcast live on national television, was hailed by many on the right, and proved a vote-winner. The chief of New Democracy for northern Greece promptly declared that his party and Golden Dawn were “sister organisations”, without provoking any criticism among his colleagues. Privileged strata and traditional politicians increasingly see the cultivation of a fascist mass movement as a legitimate reply to the advance of the left. In conditions of social dislocation and economic freefall, this may have explosive consequences.

The left grievously underestimated this threat all these years, hoping that it would evaporate by itself. Its leadership still has no strategy to counter the spread of fascism. Syriza until recently took democratic normality for granted, while the Communist party seems determined to repeat all the blunders of the German communists that brought Hitler to power.

Both parties refused to mobilise when Golden Dawn, with the support of the police, created a fief in a central Athens neighbourhood. Years of insouciance, in which thousands of attacks against immigrants provoked few reactions, led to deputies being beaten in front of the cameras. And even then, they refused to call for mass mobilisation against the thugs. The perceived moral of the story was that when fascists strike the left leadership, the latter shows a most Christian meekness. This instils little enthusiasm in the rank-and-file, and even less self-respect.

Hope comes mainly from the reaction of civil society. In recent weeks local anti-fascist fronts have sprung up from below in many places, with scant support from the official left. Mass anti-Nazi rallies, mobilising many thousands of people, shook the principal cities of Greece. There is even talk of self-defence groups, comprising locals and immigrants, that will fight Golden Dawn in the streets and provide to all the security that the state now offers to few.

The fascist advance in troika-dominated Greece was predicted by analysts. The factors that fuelled it exist in other societies too. In eurozone countries falling victim to the debt crisis, fascism will return to the fore. It has dynamics weaker than in the 1930s, but it is dangerous again. European elites have been playing with fire for too long. Germany’s chancellor, Angela Merkel, succeeded where the Führer himself had failed, in creating a Nazi party in Greece. Similar feats will require less effort in other countries.

Deflationary economic policies mixed with a state tolerant of fascist actions, a sympathetic media, a right that needs allies in the streets and a dormant left are a recipe for disaster. Siblings of Golden Dawn may patrol Bolzano or Birmingham earlier than we imagine.