How economic growth has become anti-life

An obsession with growth has eclipsed our concern for sustainability, justice and human dignity. But people are not disposable – the value of life lies outside economic development 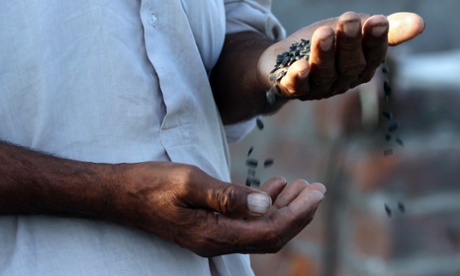 ‘Economic growth begins when seeds are genetically modified and patented, leading to farmers having to buy seeds every season’. Photograph: Raminder Pal Singh/EPA

Limitless growth is the fantasy of economists, businesses and politicians. It is seen as a measure of progress. As a result, gross domestic product (GDP), which is supposed to measure the wealth of nations, has emerged as both the most powerful number and dominant concept in our times. However, economic growth hides the poverty it creates through the destruction of nature, which in turn leads to communities lacking the capacity to provide for themselves.

The concept of growth was put forward as a measure to mobilise resources during the second world war. GDP is based on creating an artificial and fictitious boundary, assuming that if you produce what you consume, you do not produce. In effect , “growth” measures the conversion of nature into cash, and commons into commodities.

Thus nature’s amazing cycles of renewal of water and nutrients are defined into nonproduction. The peasants of the world,who provide 72% of the food, do not produce; women who farm or do most of the housework do not fit this paradigm of growth either. A living forest does not contribute to growth, but when trees are cut down and sold as timber, we have growth. Healthy societies and communities do not contribute to growth, but disease creates growth through, for example, the sale of patented medicine.

Water available as a commons shared freely and protected by all provides for all. However, it does not create growth. But when Coca-Cola sets up a plant, mines the water and fills plastic bottles with it, the economy grows. But this growth is based on creating poverty – both for nature and local communities. Water extracted beyond nature’s capacity to renew and recharge creates a water famine. Women are forced to walk longer distances looking for drinking water. In the village of Plachimada in Kerala, when the walk for water became 10 kms, local tribal woman Mayilamma said enough is enough. We cannot walk further; the Coca-Cola plant must shut down. The movement that the women started eventually led to the closure of the plant. 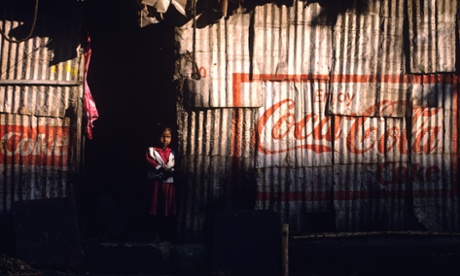 In the same vein, evolution has gifted us the seed. Farmers have selected, bred, and diversified it – it is the basis of food production. A seed that renews itself and multiplies produces seeds for the next season, as well as food. However, farmer-bred and farmer-saved seeds are not seen as contributing to growth. It creates and renews life, but it doesn’t lead to profits. Growth begins when seeds are modified, patented and genetically locked, leading to farmers being forced to buy more every season.

Nature is impoverished, biodiversity is eroded and a free, open resource is transformed into a patented commodity. Buying seeds every year is a recipe for debt for India’s poor peasants. And ever since seed monopolies have been established, farmers debt has increased. More than 270,000 farmers caught in a debt trap in India have committed suicide since 1995.

Poverty is also further spread when public systems are privatised. The privatisation of water, electricity, health, and education does generate growth through profits . But it also generates poverty by forcing people to spend large amounts of money on what was available at affordable costs as a common good. When every aspect of life is commercialised and commoditised, living becomes more costly, and people become poorer.

Both ecology and economics have emerged from the same roots – “oikos”, the Greek word for household. As long as economics was focused on the household, it recognised and respected its basis in natural resources and the limits of ecological renewal. It was focused on providing for basic human needs within these limits. Economics as based on the household was also women-centered. Today, economics is separated from and opposed to both ecological processes and basic needs. While the destruction of nature has been justified on grounds of creating growth, poverty and dispossession has increased. While being non-sustainable, it is also economically unjust.

The dominant model of economic development has in fact become anti-life. When economies are measured only in terms of money flow, the rich get richer and the poor get poorer. And the rich might be rich in monetary terms – but they too are poor in the wider context of what being human means.

Meanwhile, the demands of the current model of the economy are leading to resource wars oil wars, water wars, food wars. There are three levels of violence involved in non-sustainable development. The first is the violence against the earth, which is expressed as the ecological crisis. The second is the violence against people, which is expressed as poverty, destitution and displacement. The third is the violence of war and conflict, as the powerful reach for the resources that lie in other communities and countries for their limitless appetites.

Increase of moneyflow through GDP has become disassociated from real value, but those who accumulate financial resources can then stake claim on the real resources of people – their land and water, their forests and seeds. This thirst leads to them predating on the last drop of water and last inch of land on the planet. This is not an end to poverty. It is an end to human rights and justice.

Nobel-prize winning economists Joseph Stiglitz and Amartya Sen have admitted that GDP does not capture the human condition and urged the creation of different tools to gauge the wellbeing of nations. This is why countries like Bhutan have adopted the gross national happiness in place of gross domestic product to calculate progress. We need to create measures beyond GDP, and economies beyond the global supermarket, to rejuvenate real wealth. We need to remember that the real currency of life is life itself.

• Vandana Shiva is a guest of the Festival Of Dangerous Ideas, Sydney Opera House, this weekend.