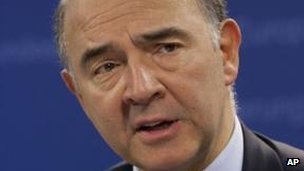 According to BBC the well-known credit ratings agency Moody’s downgraded France’s debt from AAA to AA1. In my humble opinion, what is really important to see is the rhetoric that surrounds this move. The grounds Moody’s provided were elegantly summed up as “persistent structural economic challenges.” The agency suggests this is an obstacle for development and growth and drainage of state money. Moody’s continues saying “These include the rigidities in labour and services markets, and low levels of innovation, which continue to drive France’s gradual but sustained loss of competitiveness and the gradual erosion of its export-oriented industrial base.” The French finance minister stated that the downgrade can act as motivation for France to “pursue structural reforms.”

We have seen already the financial games played on the backs of EU’s “lazy” members that have gradually and systematically forced their peoples to scrutiny. Then the annihilation of labour rights and the pawning of public property is presented as an alleged method of boosting economic growth. Perhaps also as punishment for laziness. Well, suddenly the supposedly dynamic part of the EU is now being held behind by “rigidities in labour” and “low levels of innovation.” So apparently the trend is now moving norther in Europe and the first victim is going to be labour rights. It is impossible in many ways to crush north Europe the same way as Spain, Greece and Portugal but in the name of development financiers are looking forward to a Europe of slavery and the official death of social democracy.

← Utopia on the Horizon
Gaza Animations →