In Greece, things move fast – except justice for Kostas Sakkas

Behind the anarchist’s hunger strike is the tale of his illegal detention. It would have sounded unbelievable in the recent past 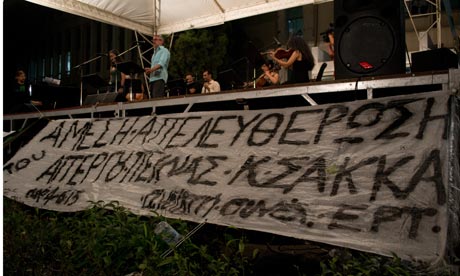 What’s in a month? Thursday 4 July marks one calendar month since Kostas Sakkas – a 29-year-old anarchist arrested in Athens in December 2010 and held in prison without a trial since – started a hunger strike, demanding an end to his detention. According to Greek law, pre-trial detentions can extend to 18 months, or 30 in exceptional circumstances. On 4 June, having already reached his legal maximum time in pre-trial detention, Sakkas had it extended by another six months by an Athens court of appeal.

One full month on hunger strike: compared with the pace of wider social developments in recent years, Sakkas’s story looks slow-paced, sluggish even. After all, it took only a few hours for the Greek government to order and then execute the closure of ERT, the state broadcaster. Its decision to lower the gross monthly minimum wage to €586 was equally rapid, along with the selective introduction of a six-day working week and significant cuts to disability benefits – all bringing a lowering of the standard of living for thousands of people. Before that, it took an equally short period of time to cancel out the reform of the 2010 Greek citizenship law that had provided potential access to citizenship for second-generation immigrants, or to begin the Xenios Zeus operation, cracking down on suspected undocumented immigrants and sending them to newly established “holding centres” across the country.

Sakkas had been originally detained as part of the wave of arrests targeting the Conspiracy of Cells of Fire group. While clearly stating his own anarchist convictions, both Sakkas and the group itself have denied his active participation. But whether Sakkas was indeed a member is no longer the question, nor do the juridical authorities seem to care. Sakkas has been held in custody for what is a national record after a series of convictions of Greece by the European court of human rights in 1996 precisely for this type of violation; Epaminondas Korkoneas, the special guard who was eventually convicted for the death of teenager Alexandros Grigoropoulos that sparked the December 2008 riots, was temporarily released during his trial as his own pre-trial maximum had expired.

There may be no rational explanation behind the extension of Sakkas’s pre-trial detention, then. Yet by now this looks like one more exceptional event in the sea of exceptions that make up everyday reality here in Greece. Since May 2010, the majority of austerity-led cuts and redundancies (even if meticulously prepared for in the media discourse) have been announced and executed at a pace that would make it all but impossible for most of those affected to follow them, to express any concerns or, woe betide, dissent against them. Getting used to such a wave of attacks might seem normal; resisting this new normality could even appear to be meaningless, or futile.

What might the motive be that drives the Greek authorities’ decision to trample over the rights of a single dissident, to order the shutdown of its own broadcaster, or to sack public servants overnight? Sakkas’s absurd story may highlight something more alarming than a mere “tough stance” on a self-confessed enemy of the state. In a statement responding to a parliamentary dialogue concerning Sakkas’s case, New Democracy (the main government coalition party) not only didn’t try to defend this unprecedented breach of legality, but instead lashed out against the leftwing main opposition Syriza for defending “any sort of accused who are charged with anarchy and terrorism”. This would have sounded incomprehensible in the very recent past, as would have been the case with the call by Vyron Polydoras, an experienced New Democracy former cabinet member who explicitly called for his party to co-operate with the Nazi party Golden Dawn.

Sakkas’s case encapsulates precisely the nature of the injustice that reigns over daily life in Greece – and further afield. Across Europe, stories of police violence, governmental injustice and intrusion into citizens’ lives are rapidly turning into a banality; an alienation, even an outright rupture between state and society is building up fast. In our fast-moving times, a month feels like a lifetime. For Sakkas, it has become precisely that: he has now put his own life on the line.