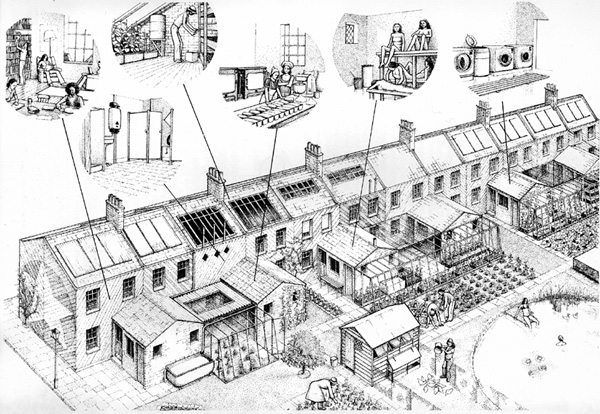 The globalized capitalist economy, in both previous and present crises, knows how to put forward only three identical goals: Enlargment! Expansion! Growth!

The political exponents constantly repeat the same words: if we want social welfare, we will achieve it only through economic growth! From the Left to Social Democrats, Christian Democrats and Neo-liberals, there is a convergence: all of them recognize that there is a great need for development, from Greece and Europe until the most remote area of the world. The greater the development, the better. Capitalism without growth? Unthinkable!

Economy with less growth? Such a proposal would harm the career of any politician who would make it, whatever party he would belong to. The ideology of growth and magnification has dominated the majority of citizens’ consciences. Globalized capitalism has made global the ideology that accompanies him too.

But ideology is a compeletely different thing from economic reality! All economic activity occurs in the context of a planet with limited economic resources, labor included. The real economy is a subsystem of this finite world. There is a false assumption: in a finite system like our own planet, there cannot be a subsystem like (the capitalist) economy, that grows infinitely. The curve with which economists represent the economic situation cannot be eternally upward, and even exponential.

This doesn’t seem to be understood because the real economy is forced by the financial one. The financial sector may present to some extent, the prospect of perpetual growth. Through the banking system, it gradually increases the volume of money in various ways without great cost. However, the production of objects and goods in the real economy requires large quantities of materials and energy, which increasingly dwindle and become scarce.

What the financial sector creates is not real growth, but a “bubble.” It doesn’t enlarge the pie, it simply inflates it: by lending to the real capitalist economy, it increases the volume of production, but it should also be increasing the demand for consumption of an accelerated volume of products and services. This increase in consumption exceeds the usual average of per capita income for the majority of citizens, who are expected to consume. Therefore, there is a need for credit and loans to households and consumers, and also to governments and states to finance the extra personal and social consumption, which is beyond the what the current annual incomes allow. Therefore, in this way what is consumed most is our future as producers of goods. By borrowing as consumers, we actually consume our future expected production as producers. Borrowers (households and states) are obliged, on the one hand to maintain the level of consumption achieved through lending, and on the other hand to repay the loan. Thereby, they are pressed to increase their future income, and hence their productivity / efficiency. This mathematically leads to exhaustion, not only of the productive resources necessary for the increasing production, but of the people themselves as producers. The future depletion-deficiency is the basis for the current “bubble” created by finance capital.

It is obvious however, that the true potentials to sustain this process in the near future, are diminishing. The real capitalist economy that depends on consumption cannot be magnified indefinitely. In that sense, it won’t be possible for consumption to grow asccordingly, even if someone names it green and sustainable.

Due to this unrivaled reality, we also havedevelopments on the political level: although up until now, neoliberal policies were depicted either as deviations from the model of prosperity and consumption, or as hard choices of “extreme” liberals, the end of the affluent society is now dealt with a broader social acceptance. Today’s developments leave no room for perpetuation of the dominant paradigm of growth-consumption-abundance, which prevailed during the “golden thirty years” and the time succeeding them.

The new state of “emergency” (a period of continuous crisis and ongoing turmoil, with potential social transformations), needs to be based on consensus of the middle class and ideological agreement “from below”. So far, it has globally generated an atmosphere of generalized social insecurity and prolonged fear, starting from the weak Southern Europe and Greece in particular. “In such a context, a number of fundamental institutions of the parliamentary system and the imaginary of popular sovereignty”* is completely discredited. The bourgeois institutions are going into a deep crisis. If in the meantime strong socio-political movements do not appear, we will probably end up with the prevalence of authoritarian regimes.

*See:”The end of abundance”, collective text of the Political Group to autonomy

← In Brazil, the mask of democracy is falling
JP Morgan to eurozone periphery: “Get rid of your pinko, anti-fascist constitutions” →