From Hitler to Merkel, by Periklis Korovesis

From Hitler to Merkel

In this article by Periklis Korovesis makes a brief and schematic connection of historical and geopolitical issues related to the hegemony of German capital -through a government serving the interests of the German capitalist class- in the new, neoliberal Europe that seems to be rising through the ‘crisis’. Furthermore, the particular text also reflects a popular narrative among Greeks -but also Portugese and other Europeans stuck by austerity imposed on their societies- presenting Angela Merkel as the new Adolf Hitler and comparing the German neoliberal economic policies to the imperialist war waged by the Third Reich. In such protests and popular configurations of the crisis, one can see that people’s collective memory of war and the traumas induced by the atrocities committed by Nazi Germany have not yet been healed. What is most important is that the emphasis on neoliberal rationales, related to the needs of a globalized capitalism, leave aside crucial ‘subjective’ issues, that delegitimize political authority and for the moment act reactionary, destroying people’s solidarities across Europe and reinforce nationalism, as evident in the cases of both Greece and Germany. The article’s purpose is not to convince with its arguments but rather to make us reflect on the reasons why a discourse  on a ‘4th Reich’ is so popular among Greeks (and other Southern Europeans) and what are the possible outcomes of such an approach. 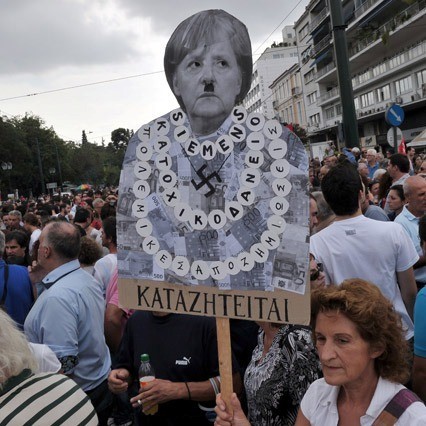 On the sign that is hold by the protester in one of the many demonstrations that have taken place the last years in Greece is written: “SIEMENS / Occupation Loan (given be the Greek puppet government to the Third Reich during WW2) / War reparations / -WANTED – “.

Usually, when we speak about Fascism and Nazism, we mostly refer to genocides, holocausts, crimes against humanity, generally to their criminal anti-humanism and less or not at all to their economic policies. Really, what Europe would look like today if Hitler had won and established his empire? What different outcomes would Hitler’s economy have for Europe if compared to Merkel’s politics?

Due to its unification in 1871, Germany emerged as a colonizing power rather late. From 1871 until First World War it conquered Namibia, Tanzania, Togo, Cameroon, New Guinea and some islands in the pacific ocean. After the catastrophic defeat in 1918, Germany loses all its colonies which are claimed by the winning side.

German Nationalism gets humiliated and resurfaces through the Nazi party. The old vision for global domination solidifies the ideology of nazi racism and consolidates the theory of Aryan race.

The first plan of action concerned the conquest of Europe and USSR, which would make Germany the third greatest global power after Great Britain and USA. And from this position it could destroy the enemy imperial powers. And the first year of war, Nazism triumphs easily, by conquering France, Belgium, Netherlands, Denmark and Norway. The nazi armies march to the East and sweep Ukraine, Belarus and the Baltic countries. The Balkans are under full control. The only open front was that of USSR.

The economic policy implied in the East was different from the one implied in the West. The Slavs, as an inferior race, had to be reduced by 30 to 45 millions and had to die by famine and illness (a recipe that had been enforced upon the colonies).

In Poland they diminished the intellectuals of the country with executions and uprooted hundreds of thousands of Poles by confiscating their land, their fields, their fortunes, their factories and giving them to German Nazis. The clientelist relations are not a Greek discovery. Every party in power needs to appoint (and DIMAR got this very fast).

In the West things were different. There had to be a way to unify the industries of Europe under Hitler’s Germany in order to achieve global domination. This challenge was undertaken by a young economist named Ludwig Erhard, who created a team of exceptional nazi economists.

The defeat of Nazis did not allow the realization of the plan concerning the “European New Order”. But the economists survived it. Erhard became Chancellor of post-war Germany and Genscher, with a well-known nazi past, became the longest-in office minister of external affairs of Germany. He kept his office for almost 20 years.

In 2003, Germany emerges as the first exporting country in the world, leaving USA and China behind. The market of 500.000.000 Europeans absorbs 60% of the German products.

How did this miracle happen? The defeated and destroyed Germany becoming the leading force of the global economy and the winner Greece becoming rapidly tranformed into the state of Namimbia and Tanzania. And, at this point, it would be crucial to recall Horkheimer who insists that : “We can not talk about Nazism, if we do not previously talk about capitalism”. 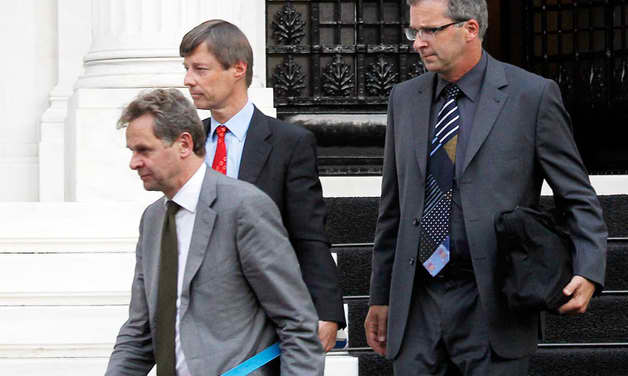 The march of the neoliberals: the excecutive employees of the so-called ‘Troika’ (IMF, EU, ECB) supevising the implementation of the continuous neoliberal shock doctrine, so-called ‘nessecary economic adjustments’ imposed on the Greek society, in one of their visits to Greek ministries.

The victorious allies separated (if they were ever united in an anti-Nazi front). The new superpower to emerge after the Second World War was the USSR and not the Third Reich as Hitler had estimated. And, thus begins the Cold War. Germany quickly washed away its Nazi past and the old members of the Nazi party became devotees of the free world (even Pope Benedict was a Nazi soldier who served in the anti-aircraft defense, shooting down the airplanes of the Allied forces).

Capitalism may create devastating wars, believing that this would eliminate a competitor, but it never fights against himself. This system knows how to adapt, to recede and counter-attack. Hitler’s Europe is different with Merkel’s on the level of the means. Anything that Hitler was unable to do with tanks and bombs, Merkel is achieving it with a bloodless economic war.

The consequences are the same. Countries disappear, as in Southern and Eastern Europe, with oblivious people who even vote in favour of their destruction. –

← At the Limit: Self-Organisation in Greece
“What is that you do not understand, mister Prime Minister?” →