Crisis Mirror presents: Golden Times – Cassandra’s Treasure, a documentary by Yorgos Avgeropoulos on the controversy surrounding the efforts of a multinational mining company to exploit the gold deposits in the peninsula of Halkidiki, Northern Greece. The screening takes place on Thursday the 28 of August in Støberiet (Blågårdsplads 5, KBH N), starting at 20.00.

A huge mining complex is being currently constructed in the middle of an ancient Skouries forest despite the opposition of region’s inhabitants, who claim in accordance with many experts that the mine will result in an irreversible impact for the environment and the local communities. For the country’s establishment, however, the exploitation of the mineral wealth appears as a reasonable solution to deal with the economic crisis that has plagued Greece for several years by now.

Observed from a broader perspective, the case of Halkidiki offers a view of the primary role the state has in the era of neoliberalism. As a protector of investors, it is willing to sell its assets even below market price and without any direct benefit for the national economy and to have its police act as private army of the buyers against people concerned about their livelihood and the environment.

After the film there’s space for open discussion.

The screening has been arranged to support the 10 days action camp, organized by the Struggle Comities of Halkidiki and Thessaloniki, that is taking place at the moment in the Skouries forest.

Further reading: an account of a recent trip to the village of Ierissos in Halkidiki: http://www.crisismirror.org/news/update-from-skouries/ 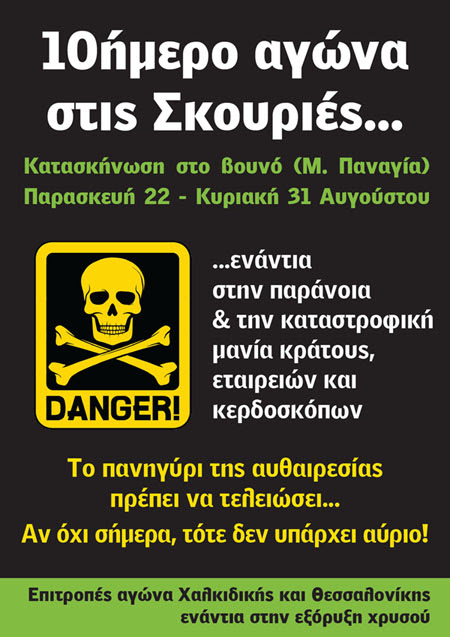 ← Presentation: “Implementation of and Struggles against the “Shock Doctrine” in Greece”
Henry A. Giroux: The Militarization of Racism and Neoliberal Violence →