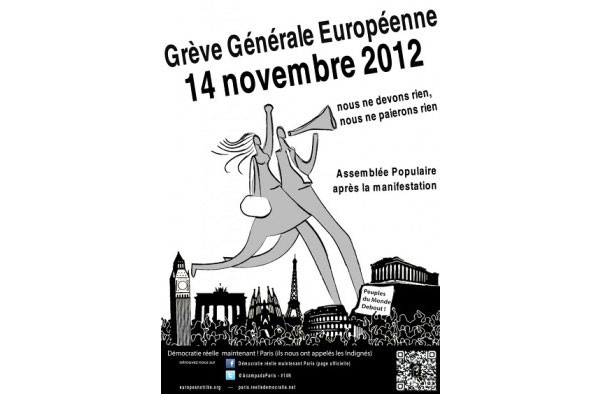 Portugal will go to the general strike next November 14 for the measures that there is approving his(her,your) Government, which more cuts of the already applied(hardworking) ones suppose, without the above mentioned have initiated the way of the recovery for the country. Before on the contrary, they have deepened the recession. These summons of general strike in the neighboring(similar) country seem to have encouraged, finally, to our majority unions (CCOO and GENERAL TRADE UNION OF WORKERS) to summoning also a general strike for this date, 14N, as well as in Greece and Italy. Reasons there have been the sufficient ones throughout the latter four years of crisis but, now, they give themselves concrete coincidental circumstances that allow the unification of all the general national strikes in the alone one in Europa’s south, a general quasi-community strike. In Spain, the Government has presented the General Budgets for 2013, which they are the most restrictive from the rerestoration(reestablishment) of the democracy. And in Greece there is negotiated by the troika a new package of cuts, which there has had to receive the benediction or the amendment of the German chancellor and boss of government fáctica of the European Union, Angela Merkel.

Rarely such a coincidental situation will repeat itself in Europa’s south: the presentation of budgets or packages of cuts for governments of center – right, to the dictation of the German Government and of the financial community troika. The majority unions of Europa’s south do not have this time you excuse to fragment his(her,your) general strikes. If they do it, after so many voices that go four years demanding(suing) the unification of the above mentioned strikes – voices between(among) which I include my one-, the above mentioned unions will have aimed an almost mortal blow at the workers for them represented, which will redound to an indifference and desmotivación union difficultly to recover in the next years. There is even the one who thinks that the above mentioned situation is looked on the part of the majority unions, though I do not sign to this thesis, at the moment. Nevertheless, yes it(he,she) would be necessary to ask why the governments continue without yielding in his(her,your) policies of hard adjustment and cuts to the State of the well-being, in spite of the mobilizations of the European workers during the last four years of crisis.

In my opinion, because the response that the union organizations are giving to the neoliberal management of this crisis remains anchored in national fights, without there is a strategy decided on the European Federation of Unions (CES) to plant them facing the governments and to the big corporations.

← SOLIDARITY IS OUR STRENGTH!
Follow live the General Strike in Spain →