Crisis Mirror has the pleasure to invite you to the Danish premier of Fascism Inc. – a new documentary film by Infowar productions. The screening takes place at Støberiet (Blågårdsplads 3, 2200 KBH N) on Thursday, 8th of May, at 20.00. Admission is free as usual. 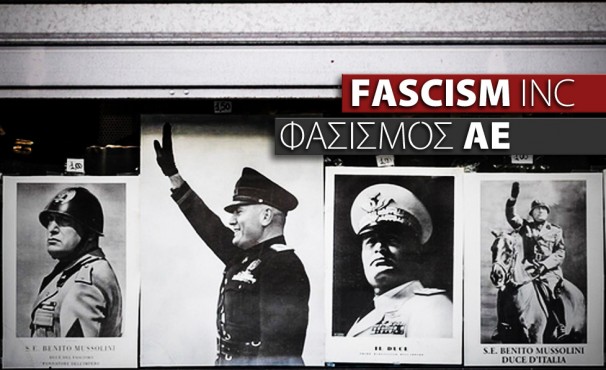 The film follows in the footsteps of Infowar production’s earlier documentaries, Debtocracy and Catastroika, which described the causes of the debt crisis, the impact of the austerity measures and the erosion of democracy. This time the production team maps in discussion with renowned historians and journalists the relation between fascist movements and the accumulation of capital both in the past and the present. The story takes us to Mussolini’s Italy and Hitler’s Germany and then back again to our own time, when the whole Europe is sinking rapidly into the darkness of the far right. At the core of the film lies the question: “How can anyone tell the truth about fascism, unless they are unwilling to speak about capitalism which brings it forth?”

Fascism Inc. is inspired by and aspires to motivate anti-fascist movements across Europe. As with their previous films, Infowar productions has categorically rejected any funding from political parties and companies and relied instead on crowd-funding which makes their work one of the largest independent production experiments in the documentary field.

← Documentary: Pieces of Madrid
Greece: Which is the private company G4S about to take over the security of detention centres →